The following are some of the items that you can collect during the game. Some of them have multiple colour variations, including but not limited to the Poogle racer, Chia, Brucicle, negg, slushie, and Chia pops.

Two of the slushies have special powers. The black slushie increases your traction, which speeds up your snowball and makes it more difficult to dodge obstacles. The white slushie turns your snowball into a black hole, which attracts all of the items that give you points so you can focus solely on avoiding obstacles for a short period of time.

Items are worth the same amount of points regardless of which level of the game you're on, so here's a table listing the point values of all the items you can pick up:

After submitting your score you may also be randomly awarded one of these Snow Roller Exclusive Prizes: 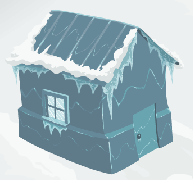 Don't run over your storagehouse or you'll start losing items!

When activated, the 2019 Charity Corner perk, More for Less, decreased the score needed to 5,200+ points.

This game guide was written by: Zelda