Scoring in Dueling Decks is based on how many hands you win in a row, with the points awarded doubling for each consecutive win. Once you've reached five wins, as shown on the combo meter in the upper-left corner of the screen, your wins will be reset and you will get a "bonus awarded" notification. While this feature supposedly awards extra points, it does not currently seem to be working.

The number of points you receive for each winning hand will vary depending on the difficulty level you select at the beginning of the game. The Hard difficulty grants twice as many points as Normal, which in turn grants twice as many as Easy. Due to this, if you're trying for a high score in the game, it is recommended that you play on Hard.

In Easy mode, you will always have the choice of which attribute is played, regardless of who won the last hand. This gives you complete control over the game, though as seen above, you will receive the smallest number of points. In Normal mode, should you lose a hand to Zenco, he will choose which attribute to use next. You can, however, influence his decision with a roulette-like game that scrolls through the attributes; click the Choose button when it's pointing at the option above the one you would like for the best chance to select it. 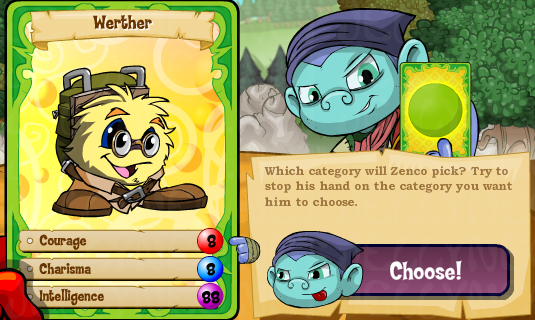 In Hard mode, losing a hand will give Zenco full control over which attribute to choose. He's quite good at selecting a card's best attribute, so it could be several rounds before you're in control of the game again. Despite this, it is recommended that you play on Hard, as it awards the most points and can be played more quickly than Normal.

While winning a game of Dueling Decks isn't terribly hard, getting a high score requires time and determination. In order to gain a score in the tens of thousands for a gaming event or to reach the high score table, you must repeatedly collect the majority of the deck, then allow Zenco to win some of the cards back. So long as you can keep moving the cards back and forth with neither side winning, you will be able to continue earning points. To do this, it is recommended that you keep one of the strongest cards (such as Judge Hog or Ylana Skyfire) in your deck, even if you're intentionally letting Zenco take cards. You should also keep in mind that you can use the Wildcard at any time during play, regardless of whose turn it is.

If you're particularly enterprising, it is possible to predict which card Zenco will throw out and which card will come up for you. Your cards start in the order shown to you at the beginning of the game (left to right, top to bottom). Whenever somebody gains a pair of cards, player's card is added to the end of the deck first, and then Zenco's card is added after it. If there's a tie, the disputed cards go into the deck before the winning pair of cards, and each pair of cards is organized with the player's first and Zenco's after that. The pairs are added in order of original appearance.

So, fancy a game?

This game guide was written by: Chesu